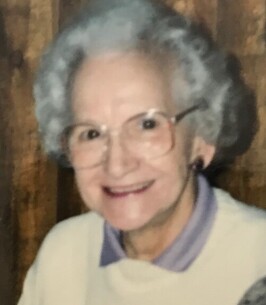 Born May 23, 1922 in the town of Virgil she was the daughter of the late Frank and Elva Burvee Sycuske.

Having been a lifelong resident of the area she had graduated from McGraw Central school and when she married her husband, Harland Benedict she had helped him with their dairy farm on North Road in McGraw for many years. She had worked for many years at the Groton and Cortland Smith Corona until her retirement.

Finding herself with too much time on her hands in retirement she was asked to cook at the Brewster house which she did for several years and she had enjoyed crocheting.

She is survived by her sister Janette Sycuske and brother Frank Sycuske both of McGraw, New York. She is also survive by several nieces and nephews.
Besides her parents and her husband she was predeceased by her sisters, Theresa Gay, Nina Grummons, Stella Brown, Madeline Wilson Berthena Heath.


Funeral services will be held on Tuesday , November 16, 2021 at noon , with Pastor Sharon Newman officiating at the Zirbel Funeral Home, 115 Williams St., Groton, New York. The family will receive friends from 11:oo a.m. to noon prior to the services. Interment will be in Glenwood Cemetery, Homer, New York.

Memorial contributions may be to the charity of one’s choice. Condolences may be made to Cedie’s guestbook at www.zirbelfuneralhome.com

All rights reserved. This obituary is also archived at obittree.com